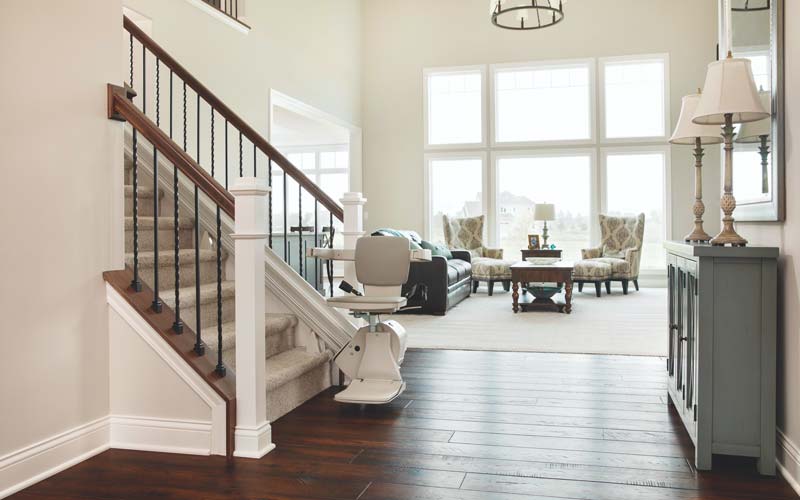 Many health issues can make getting up and down stairs unsafe or nearly impossible. Nursing homes may encourage rehabbing residents to not leave their facility until they can get into their home safely.

The most common scenario is trying to access your living area from the garage. Often the garage leads to the basement which then requires you to climb 10 to 14 steps to reach the living area.

Difficulty going up and down stairs may also prevent you from getting to your basement or second level from the main level.

A common solution is installing a stair lift in your home. Stair lifts are composed of a rail that goes along the stairs. A chair, connected to the rail, operates electronically and goes up and down the stairs. The rails can be straight, with one curve, or many curves depending on the house’s construction or what levels you’d like to reach. Some stair lifts are weather guarded and able to be used outside. The longest stair lifts I’ve seen went up nearly 50 steps.

Stair lifts – which usually take two to four hours to install – are mounted into the steps’ floor. If the steps are carpeted, you can’t tell a stair lift had been there after being removed. If not carpeted, the few screw holes made in the steps can easily be filled.

Made to accommodate a wheelchair, stair lifts can also be used by people who have to stand all the way up the stairs because they can’t bend their knees, overweight individuals requiring a wider seat, or tall persons who needs a raised seat.

Plugged into a regular 120-volt outlet, stair lifts come with many safety features such as seatbelts, arm rests, swivel seats, a braking system, foot rest sensors, battery back-ups, and controls that allow you to call or send the chair to the other end of the stairs.

Stair lifts are an affordable option to solve a frustrating problem for thousands of people unable to get up and down their steps.

Here are a few testimonials:

“My mother-in-law travels to Omaha for a month during the holidays every year and stays at my house. Three years ago, she fell down the steps and almost broke her neck. She said she wouldn’t come back again until a stair lift was installed. To keep peace with my wife, I installed the stair lift. My mother-in-law now feels safe and has been back the last two years. I saved my marriage.”

Until having a stair lift installed in her home, a Shenandoah, Iowa lady hadn’t been in her basement where her sewing machine and crafts are located for eight years.

A woman in Red Oak, Iowa who lived above her hair salon, felt unsafe going up and down the steps getting to and from her business. She was feeling depressed but got a new lease on life after the stair lift was installed.

When necessary, some companies will rent, move, and buy back stair lifts.

Installing a stair lift may be a great way to help keep you living in your home for as long as possible.

Kohll's has been serving patients in Omaha, Lincoln and western Iowa since 1948. We provide high-quality service to better your health.

Do you have COVID-19 questions? Use our Contact Form to receive the quickest response.